A continued high attention to cost is required to stay competitive

Break-even prices on the NCS are currently competitive compared to other oil provinces (Figure 32). As Figure 33 indicates, this is mainly due to low operational costs, which again is caused by a cost-efficient infrastructure well suited for development of new resources in the fields or near-field tied back to hubs.

Although exploration costs (Expex) and capital costs (Capex) for new projects have come down considerably since 2014, Figure 33 clearly shows that Expex and Capex on the NCS are relatively high compared to the competition. 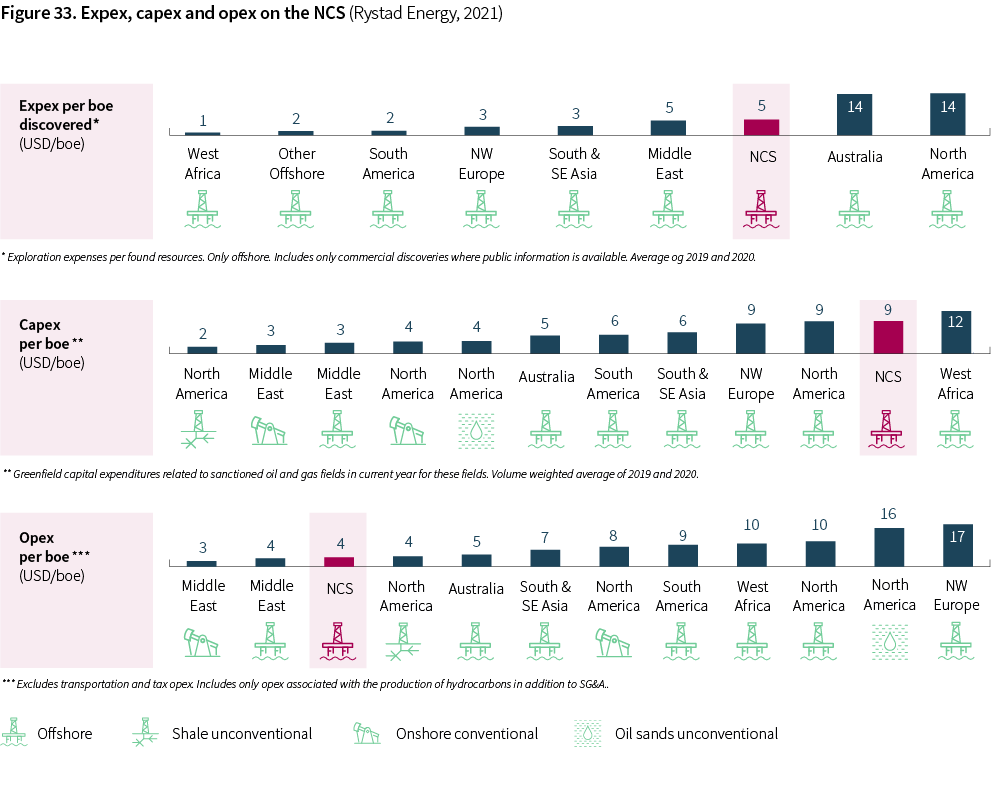 To further underline the generic cost challenge, the currently favorable Opex level on the NCS contributing to the low break-even price, cannot be taken for granted. Operational costs remain largely at the same absolute level for an installation throughout its lifetime, and as the production from a field declines, the average lifting costs per barrel increase. Figure 34 illustrates this on an aggregated level for the NCS. 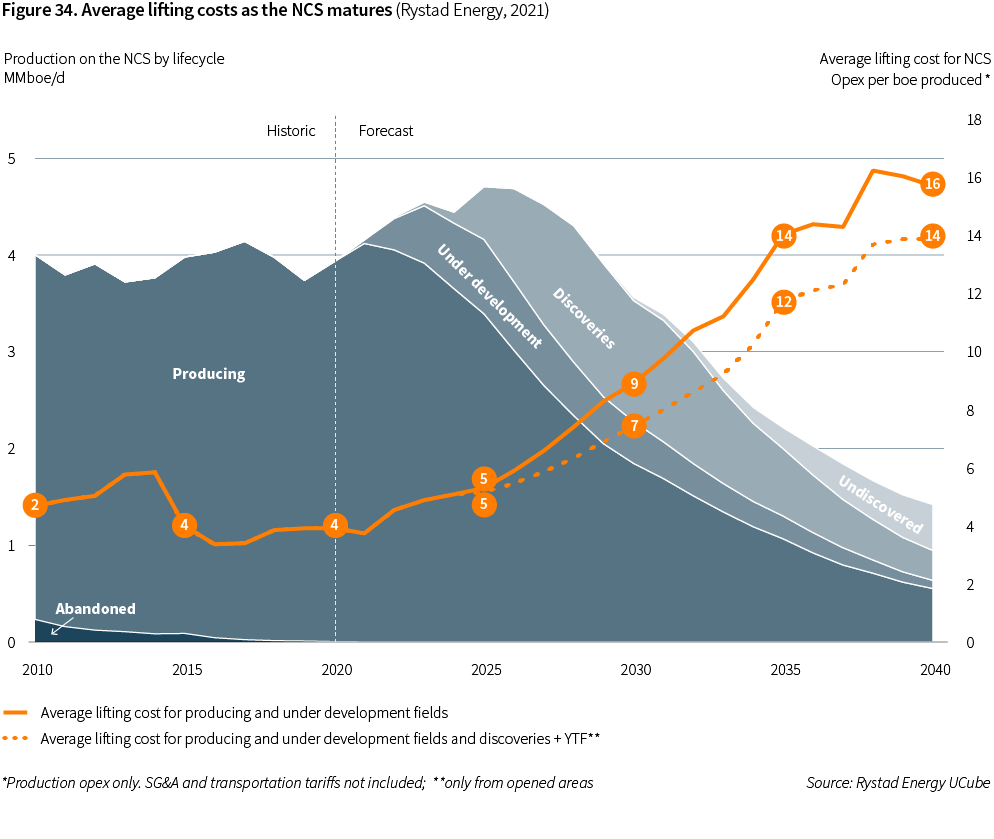 As Figure 35 illustrates, we expect four main cost areas over the next two decades: 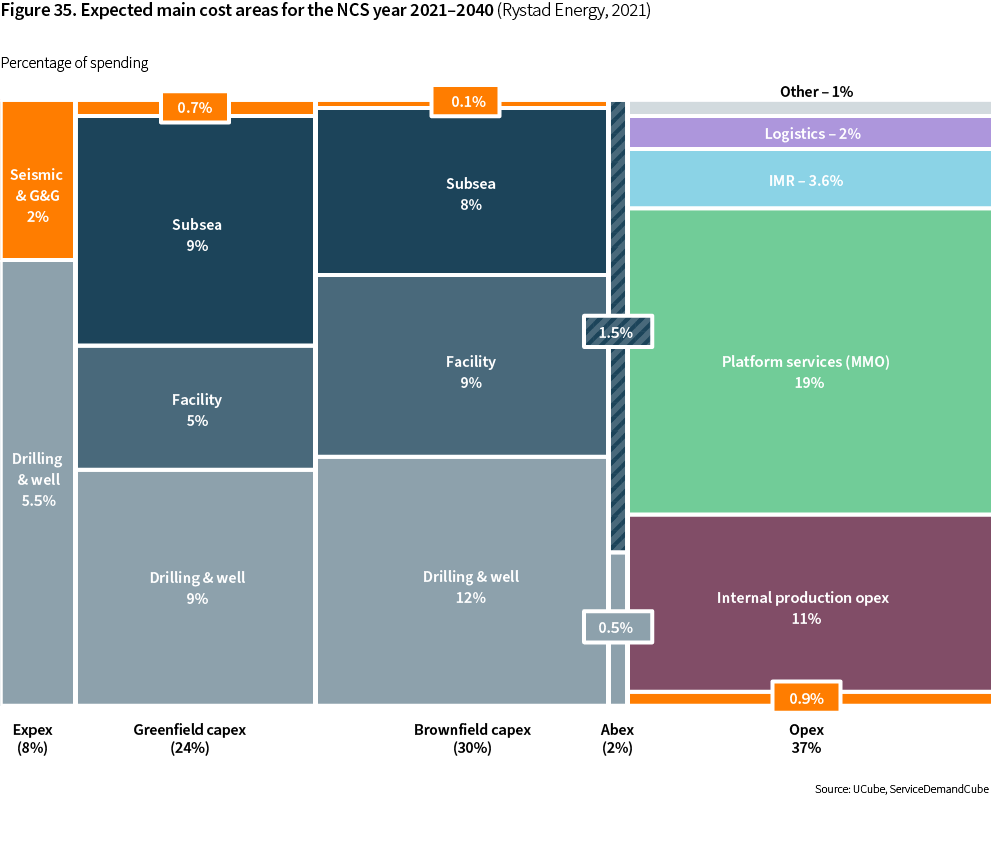 A deeper dive into the expected four main cost areas is shown in Figure 36. 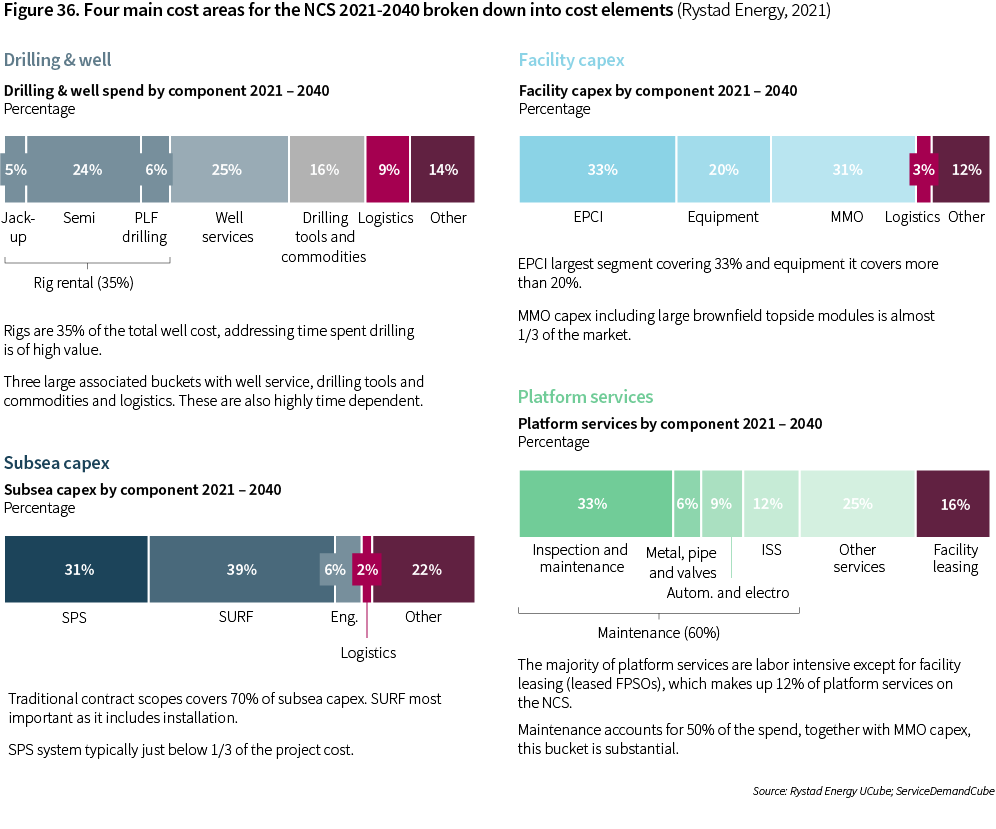 De-commissioning costs is a growing concern on the NCS. Many fields approach the end-of-life, and wells will have to be plugged and facilities removed. UK numbers suggest that plugging and abandonment of wells (P&A) contribute with 49% of de-commissioning costs, whereas removal of facilities, site remediation and monitoring combined contribute with around 34% of the costs.

More than 3000 wells are going to be plugged and abandoned safely on the NCS over the next decades. A typical P&A operation on the NCS takes 35 days with the use of a mobile drilling unit. This is longer than P&A operations in other offshore petroleum provinces and it drives costs. More efficient P&A methods in addition to methods that would allow lighter vessels to be used for P&A, would have the potential to reduce costs considerably. 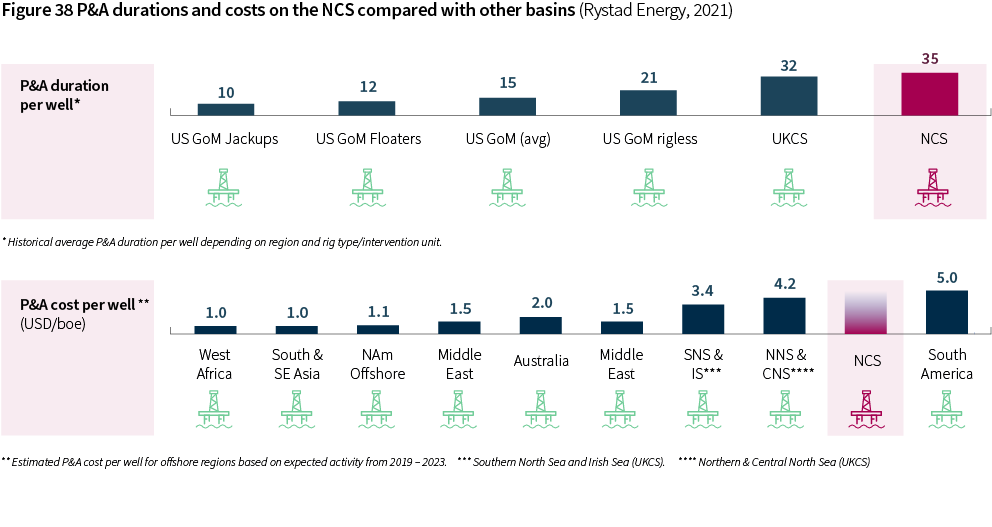 Utilizing and extending the life of existing infrastructure contributes to cost-efficient development of new fields in the vicinity. This has a positive effect on NPV as some de-commissioning costs are moved into the future. An alternative use of facilities when the field approaches late-life or even after production has shut down, could have the same effects.

The cost challenge on the NCS remains high in all phases: exploration, field development, production and operations, and de-commissioning including P&A. Bringing costs down is an important driver behind the development and implementation of new technology for all these phases, as the discussion of OG21's technology priorities in Section 4 shows.