Operational GHG emissions to be reduced

Greenhouse gas emissions (GHG) from the NCS production measured as kg CO2 per barrel produced (CO2-intensity), are the lowest among petroleum provinces globally, (Rystad Energy, 2021). This is largely a result of the ban on regular gas flaring introduced in 1974, and the introduction of a petroleum CO2-tax in 1991. Still, the petroleum production is a significant contributor to the total Norwegian GHG emissions, as Figure 17 shows.

The Norwegian petroleum industry represented by the Konkraft collaboration, launched ambitious GHG emission targets in 2020 aiming for a 40% reduction in operational GHG emissions by 2030 as compared to the 2005 level, and further reducing the GHG emissions to near-zero by 2050. As part of the temporary tax changes for the petroleum industry agreed in the parliament in June 2020, the parliament asked the industry to further strengthen its 2030 target to a 50% reduction by 2030, see Figure 18. (Konkraft, 2021).

The main contributor to CO2-emissions on the NCS is turbines, generating energy for the operations, see Figure 19. The turbines are combustion engines running on natural gas, with thermal efficiencies dictated by fundamental thermodynamic laws and the load characteristics. Without bottom-cycle or heat recovery, offshore gas turbines typically have thermal efficiencies in the 30-35% range. The alternative use of the gas in modern combined cycle power plants onshore have a thermal efficiency above 60%, with a corresponding reduction in CO2-emissions. In addition, capturing CO2 for sequestration would be easier on large onshore plants. The case for electrification of the NCS with power from shore based on the Norwegian power mix or from other renewables, is hence strong from a technical CO2 emissions perspective.

Figure 21 illustrates that electrification from shore is the most important measure to meet the 2030 ambition. However, energy efficiency, reduction of flaring, and wind power have also been identified as important contributors by Konkraft. 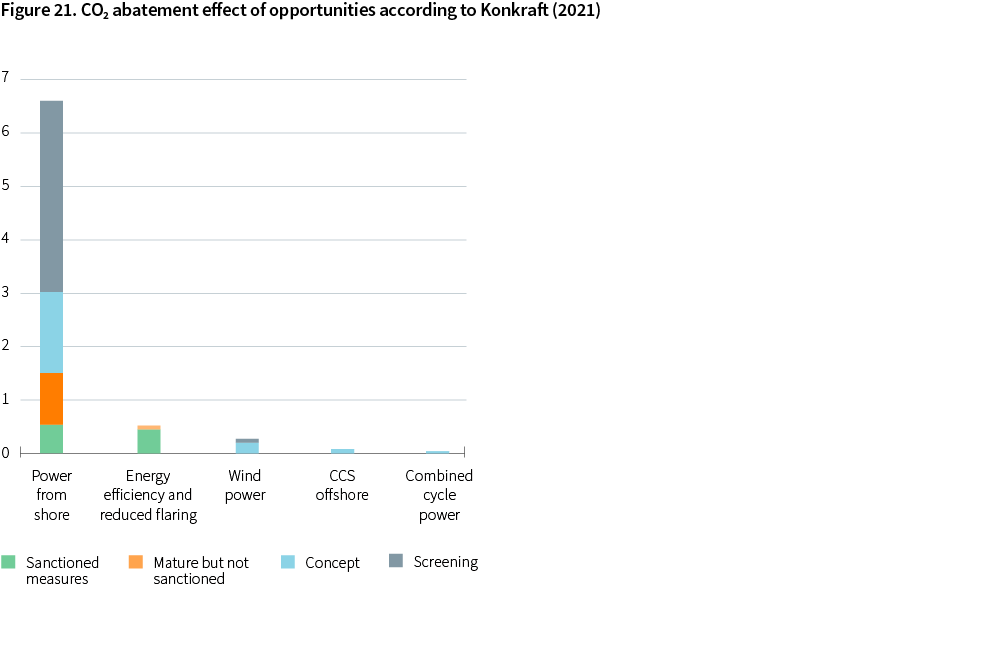 As producing fields mature, their CO2-intensity can be expected to increase unless measures are taken. Such measures include tie-back of new resources to increase the denominator in the metric, reduced water production through better reservoir drainage solutions or water separation downhole or on the seabed, and improved energy efficiency topside. Such measures, and other technology opportunities that could contribute to bring down GHG emissions, are described in Section 4.