The global total primary energy demand (TPED) in 14 scenarios provided by 5 well recognized organizations[1], is shown in Figure 3. There is a considerable spread in the forecasts towards year 2050, depending on the assumptions they are based on. The assumptions on whether the world meets the targets and ambitions of the Paris-agreement and to which extent CCS is implemented, are the most important.

With exception of the Shell Sky scenario, which assumes an even more extensive use of CCS than the other "less than 2 degrees" scenarios, the "less than 2 degrees" scenarios describe an energy future where the world's energy demand peaks before 2035. They describe a future where renewables such as hydro, bioenergy, solar power, and wind power, dominate the energy mix and where coal has largely been phased out. The relative contribution of oil and gas is smaller than today, but still significant, typically 30-40% of the energy demand. In all the scenarios where the world meets the 2-degree target, CCS plays an important role.

2.3.2 Oil and gas demand during the energy transition

Oil and gas are likely to continue to play an important role in the global energy mix in the decades to come, but the long-term demand is increasingly uncertain. Figure 4 shows the large span of liquid demand scenarios from recognized sources such as IEA, DNV GL, Equinor, BP and OPEC (Rystad Energy, 2021).

The scenarios compared can largely be grouped into two: those describing a transition to an energy mix that meets the 2 degrees target of the Paris-agreement, and those that do not meet the target. 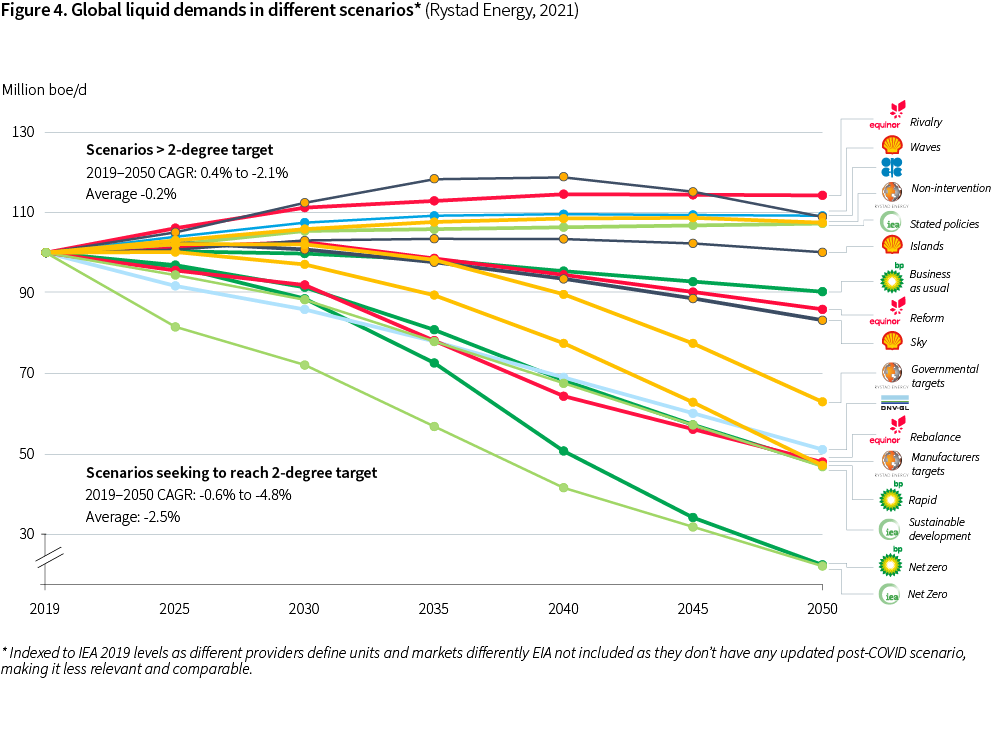 The “low carbon” scenarios reflect major technological and investment shifts both on the energy supply and the energy demand side. For instance, and as Figure 5 indicates, large scale electrification of road transportation could alone address nearly half of today’s oil demand (30% of the 2019 oil production was used for fueling light vehicles and buses and 18% was used for light and heavy trucks). Provided that the electricity is generated from renewables or de-carbonized fossil fuels, electrification of the transport sector is becoming increasingly more attractive, both from an emission and an economic perspective.

Other parts of today's oil use could be more challenging to replace. Maritime transport and aviation require a much denser energy storage than what today's electric batteries can offer, and further advancements of batteries, biofuels, hydrogen, and hydrogen-derived fuels will be important. Furthermore, oil is used in petrochemical and other industries where it could prove hard to replace. For such industries, the search for cost-efficient alternatives to oil as well as re-cycling of oil-derived products, will be important to reduce demand.

The transition to net-zero societies globally is therefore going to take time, and oil is likely to be needed for many decades to come.

The future demand for natural gas is also uncertain as Figure 6 shows. However, all scenarios that aim at meeting the Paris-agreement 2-degree target, predict that also global gas demand will peak by 2035 and decline towards 2050.

Gas markets are regional to Asia, the Americas and Europe. Long distances between the regional markets, lack of import/export infrastructure and high shipping costs limit the trade between the markets.

More than 95% of Norway’s gas production is piped to the European market, with the remainder shipped as LNG to other markets. The European market is therefore of key importance for the sales of natural gas from the NCS.

Most scenarios show robust demand for natural gas in Europe near-term and until year 2030. The use of natural gas in modern gas power plants results in only half the CO2-emissions from coal-fired power plants, and as such natural gas is an important energy carrier to reduce European emissions in the short to medium term.

However, EU is implementing its Green Deal with a zero-emission vision for 2050, and in the scenarios supporting the vision, natural gas without CCS plays a limited role. De-carbonizing natural gas would therefore be crucial in a long-term strategy for the Norwegian gas. Gas-to-X technologies (blue hydrogen, electricity or other energy carriers) with CCS are key elements of such a strategy. The IEA Net Zero by 2050 scenario (NZE) has drawn significant attention since its release in May 2021. It provides a roadmap to achieve net zero CO2 emissions by 2050, and the path described meets the 1.5 degrees ambition of the Paris Agreement with a 50% probability.

The NZE predicts a peak in global energy demand by 2023 before a reduction of 10% towards 2050. With a growing population, the energy demand per capita would over the same period be reduced by 25%. Oil and gas would in 2050 contribute with 8% and 11% respectively of the total energy supply (8% natural gas with CCUS, and 3% without).

The NZE hinges on many uncertain assumptions. IEA highlights large behavioral changes on the individual level, modern bioenergy and its associated large land-use, and a fast pace of CCUS adoption, as the three most important. Several other assumptions stand out in addition, most notably the need for alignment and concerted efforts on a global scale, massive investments e.g. in electricity systems, a rapid maturing and broad adoption of new technology such as hydrogen, and access to sufficient quantities of rare earth minerals and critical metals.

To facilitate an orderly transition to zero-emission societies it is going to be important that policies to curb supply are aligned with policies to curb demand. In a comment to the NZE, Jason Bordoff of Columbia University writes: "Unless both supply and demand change in tandem, merely curbing the oil majors’ output will either shift production to less accountable producers or have potentially severe consequences on economic and national security interests while doing little to combat the climate crisis" (Bordoff, 2021). Bordoff bases his analysis on the fact that only 15% of the oil delivered to the market is produced by international oil companies (IOCs). The bulk of the oil (57% in 2018) is produced by national oil companies in OPEC countries plus Russia, and the remainder is produced by independents (OG21, 2020b).

The NZE assumes an oil price decline from 37 $/bbl in 2020 to 24 USD/bbl in 2050 to balance supply and demand, and states: "The rapid drop in oil and natural gas demand in the NZE means that no fossil fuel exploration is required and no new oil and natural gas fields are required beyond those that have already been approved for development". Following the arguments of Bordoff in his evaluation of the NZE, the assumed oil price decline would have to be driven by reduced oil demand resulting from substitution with low-emission energy sources outcompeting fossil fuels on costs, and not by curbing oil supply. As such, the eliminated need for new investments in exploration and field development in the NZE should be a consequence of CO2-pricing and large-scale development of low-emission energy, and not a result of unilateral political decisions on banning exploration and field development.

If the NZE projected price trajectory should materialize, it is not a given that remaining resources in existing fields are more cost and emission effective than resources in new fields. For the NCS, new resources close to existing infrastructure could very well be economically viable within the 30-35$/bbl oil price range projected by the NZE in the period 2030-2040. This is the likely period much of the remaining resources on the NCS would be realized. The associated GHG emissions from such new resources could be substantially lower than from some of the contingent resources in existing fields globally.

The NZE is one of many scenarios describing the on-going and necessary global energy transition. When evaluating petroleum technology needs for the future, it should be treated as such, although with a considerable weight given the potentially high impact it may have on policy development.