Continual safety improvement in a time of change

The Norwegian oil and gas industry's ambition is to be world leading in health, safety and environmental performance. Returning safely from work and not experiencing work related health problems, is a value which is embedded in the zero-accident philosophy widely adopted in the industry.

Furthermore, accidents and work-related health problems have implications on business opportunities, revenue, and profit. Safety incidents harm companies' and industry's reputation and challenge the "license to operate", cause production down-time, and may erode shareholder value. Examples are numerous, ranging from small incidents like the accidental discharge of 1 m3 of hydraulic oil from the Eirik Raude drilling rig in the Barents Sea in 2005 causing a three-week delay and a dent in stakeholders' support to Barents Sea operations, to catastrophic accidents like the Macondo explosion, resulting in 11 fatalities, an oil spill of 780 000 m3, and company costs of more than 65 billion USD.

The zero accidents vision and the no harm principle set the ambition for HSE efforts. However, incidents, accidents, and exposure to working environment hazards still occur. To guide the industry in its endeavor to realize the vision, the principle of continuous improvement is widely applied.

The HSE standards of the Norwegian petroleum industry are recognized to be among the highest in the world. One important reason for this is the continuous efforts made through the Norwegian tripartite cooperation between regulators, employer organizations and trade unions. As Figure 12 shows, this is surprisingly not reflected in international injury statistics collected by the International association of Oil and Gas Producers (IOGP, 2021), where European oil producing countries appear to have poorer lost time injury rate (LTIR) than other regions such as Asia, Russia and Africa where working environment regulations are believed to be less stringent.

The apparently poor safety performance of the European region is less pronounced in the statistics on fatalities, see Figure 13, where the European region is in the middle of the investigated regions. We believe that the reporting accuracy increases with accident severity, and that the lack of correlation between LTIR and Fatal Accident Rate (FAR) numbers reflects diverging reporting practices rather than actual safety performance. OG21 has therefore not used the IOGP statistics as the basis for identifying safety gaps and measures, but instead used data and analyses from the Norwegian Petroleum Safety Authority (PSA) to discuss trends and improvement needs. 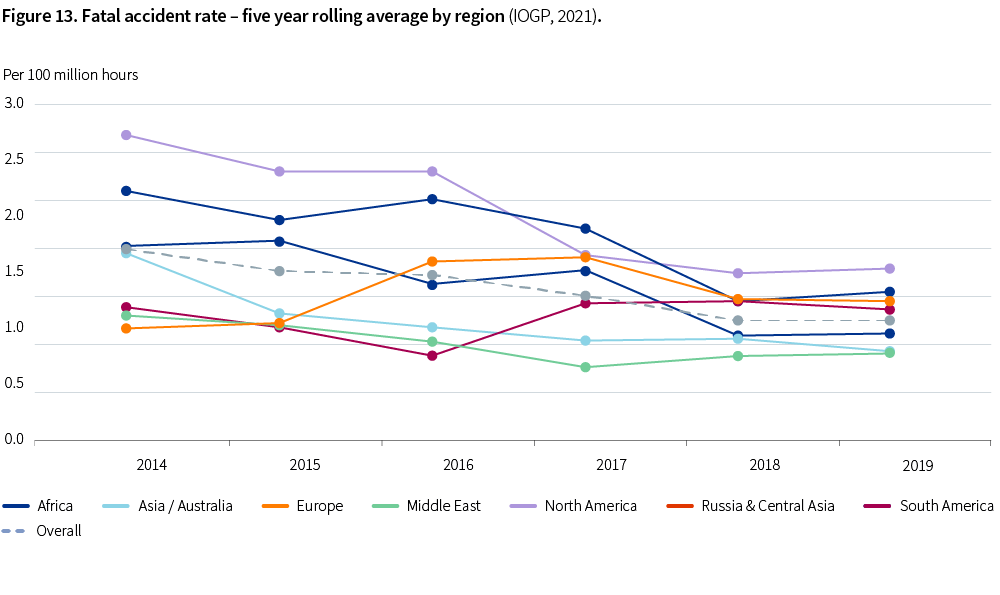 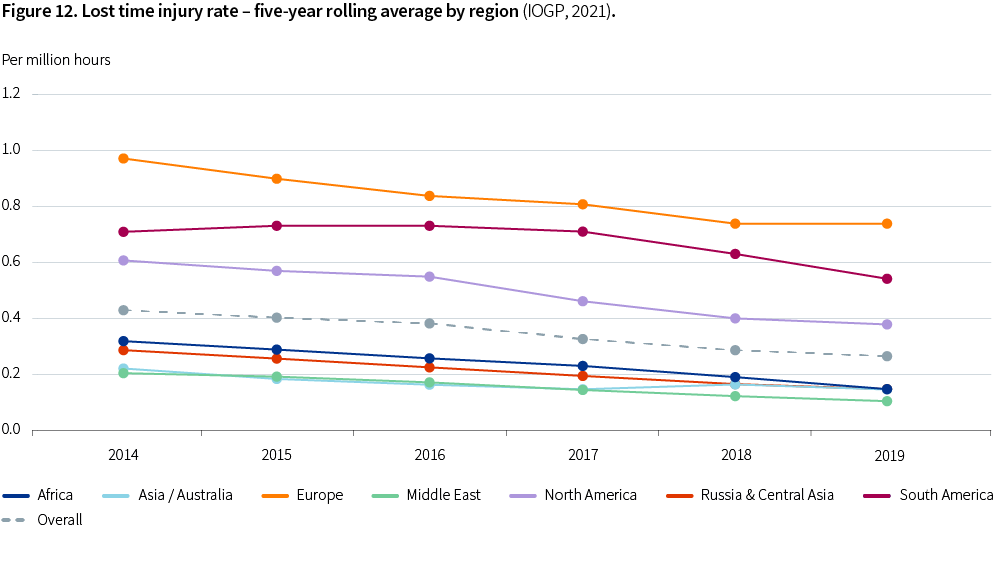 In the latest version of its report Risk level on the NCS (RNNP), the PSA concludes that the safety in the Norwegian petroleum industry remains high. The number of offshore incidents with a major accident potential is down, where especially the numbers of hydrocarbon leaks and well control incidents in 2020 were historically low, (PSA, 2021). 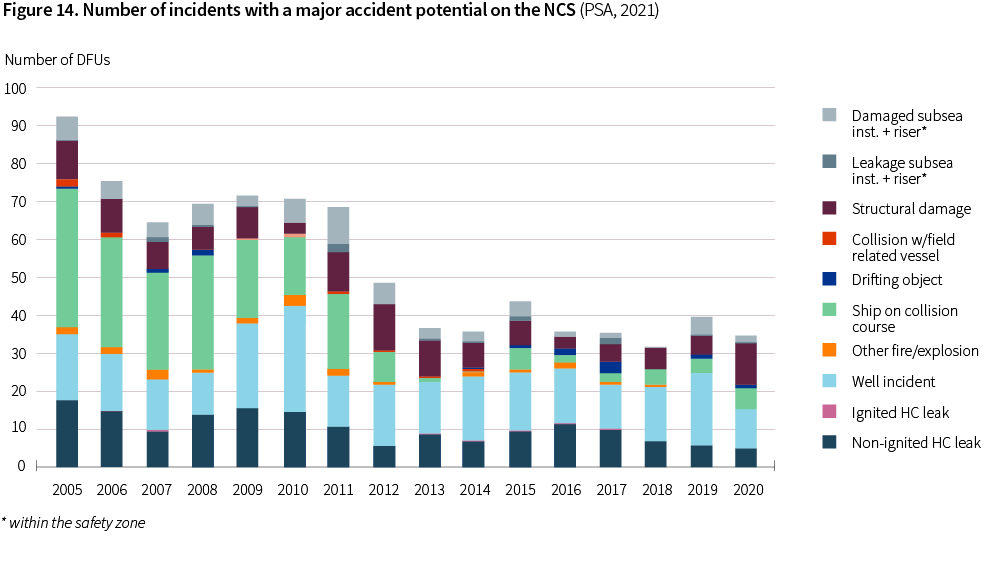 However, the trend on some indicators causes concern:

However, it is important to state that the RNNP is a tool used to analyze trends over several years that require action or attention. Each report does provide a "snapshot" for a single year, but the formulation of R&D challenges and priorities is based on the trends observed over years. 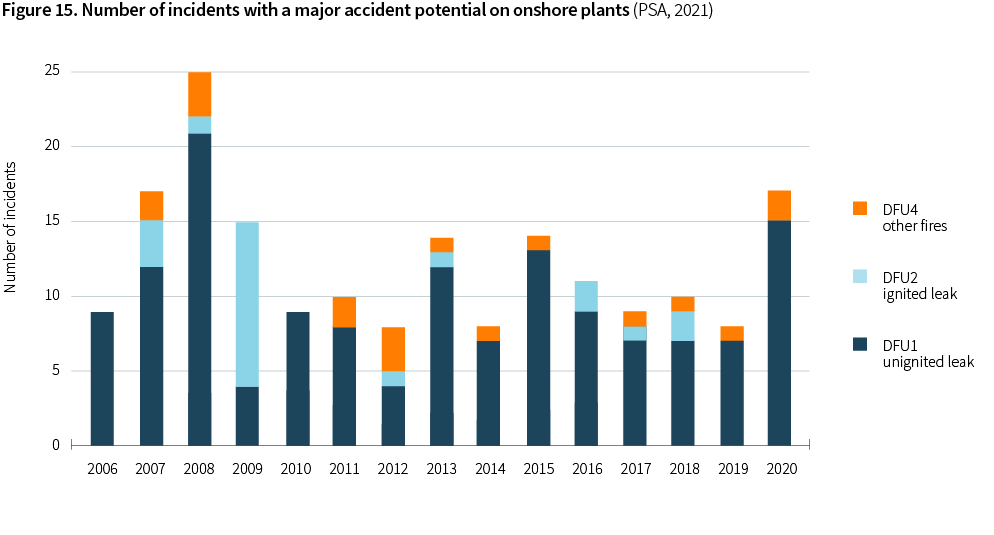 The further development of the NCS to stay competitive on costs, volumes, emissions and lead times, will require efficiency improvements, where the introduction of digital technologies, new business models and work processes, are central elements. New technology and the accelerating pace of changes introduces new hazards and risks that will have to be managed in the spirit of the zero accidents philosophy.

A continual improvement of HSE performance requires management attention and prioritization, as well as improved understanding of HSE risks, hazards, and under-lying causes. OG21 has in Section 4.1 identified several areas where new knowledge and technology could contribute to a continued positive trend in HSE performance on the NCS.